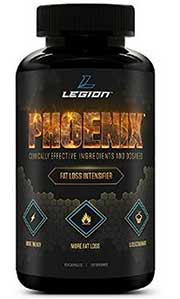 Legion Phoenix is a caffeine-free fat burner produced in the US by Legion Athletics. The company has a good reputation and the official website does not leave the customer guessing about the contents of any of their products or how they are designed to work. The site offers several contact methods for customer services and all Legion products are backed by a guarantee, so as a supplier they are at the top of their game.

Negatives: Not as effective in our opinion of some of other fat burners

How Does Legion Phoenix Work? 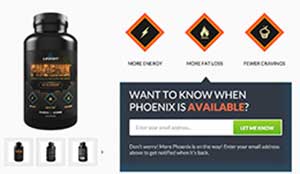 Legion Phoenix works by giving the metabolism a boost and creating a condition that is conducive to fat burning. As with many competing products stimulants are an important part of the formulation, but unlike the rest of the crowd Legion Phoenix does not include any caffeine.

Caffeine’s ability to cause the jitters and other side effects is well known, and many people cannot tolerate it, so Legion Phoenix is already a hit with many users. The lack of caffeine does not mean the chance of side effects has been banished though. All of the ingredients used in Legion Phoenix have the potential to cause side effects, some of them much worse than any attributed to caffeine.

Legion Phoenix is a new product and is not available in all regions at the time of this review – we may revisit and update our opinion and report at a later date when there is more data.

How to Take Legion Phoenix – The recommended dose is two capsules, taken twice a day with meals. For maximum benefits Legion recommends combining the capsules with caffeine. It may very well improve results, but it kind of defeats the object of creating a caffeine free formula.

Some users complain of side effects, other state the formulation failed to work.

“If vomiting counts as a result I got a result and it was pretty long lasting as well.”
“Nasty! . Don’t buy them. They don’t do a thing. Going to try and get my money back.”

But some other reviews are more positive:

“I’m on bottle number 2 now and am loving the results. I’ve shed over 50 pounds and not had a single side effect so all in all it’s been a very positive experience and I’m recommending Legion Phoenix to all my buddies down at the gym.”
“This stuffs burning my fat so fast I’m getting worried about blisters! Legion Phoenix where have you been all my life???!!!”
“Best fat burner I ever tried and it’s the only one that hasn’t given me the jitters.”

All of the ingredients used in the formulation are capable of producing side effects. Hesperin usage can result in facial swelling, hives, and anaphylactic shock. Hordenine can push up the blood pressure and the rest of the ingredients can also produce equally unpleasant reactions. That does not meant they will. Most people should be able to use the formulation without issue, but considering the dangerous possibilities, all potential Legion Phoenix users should consult with their GP before commencing supplementation.

A money back guarantee is provided and is good for three months.

Alternative Product – What We Recommend

There are two target markets of Capsiplex – the product fits both equally and perfectly. One is the weight loss marketplace for those who need to lose body fat and the second is the sports supplement market.