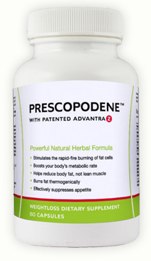 Prescopodene is a slimming tablet aimed at those (according to the manufacturers) looking for a fast solution to weight problems. It is available in many countries – typically the UK, USA, Canada and Australia.

The official website claims that by increasing the body’s rate of thermogenesis, it will assist with weight loss without the aid of a calorie controlled diet or exercise regime. While this is true to a certain extent, the product in question needs to be of certain calibre to reach the level thermogenesis required.

Is Prescopedene of a certain calibre – read our review.

Claims: To be a best seller in many countries. Accelerates weight loss, curbs hunger and increases energy

Negatives: No real product information, numerous complaints about both product and after sales service

What is Prescopodene And How Does It Work 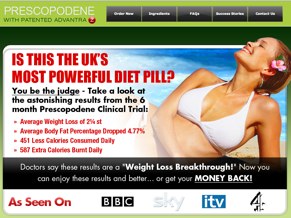 A non prescription diet pill that claims to be natural and yet powerful – the manufacturers pose the question “is this the UK’s most powerful diet pill?”  on the UK official site.

The short answer is no.

The main concept is thermogenesis, the manufacturers claim this to a breakthrough is weight loss. Yes thermogenesis is highly effective but it is not unique to Prescopodene, far from it – A product called Capsiplex has been doing this for the last few years .. and rather well

The ingredients are all-natural and are commonly listed as weight loss promoters.  The main ingredients in Prescopodene seem to vary between the British and the American website, but Advantra Z is the main component listed on the British website.

It is made up of ascorbic acid (Vitamin C), pyridoxine, green tea and citrus aurantium.  The American website also lists other compounds such as Grape Seed extract, ginger root and L-tyrosine.

Many chemicals that were used in slimming pills in the past were recalled or simply fell out of favour due to links with heart attacks, especially those that claimed to increase energy and metabolism.

Prescopodene does not contain any of these elements in an attempt to provide a safe assistant to weight loss.

Unfortunately Advantra Z contains citrus aurantium, which was introduced to slimming pills to prevent heart complications.  However, it was not known when it was introduced that it may cause strokes.

There is increasing evidence to suggest that there is a link between citrus aurantium and strokes but, as slimming pills are largely unregulated by drug agencies, it continues to be used. 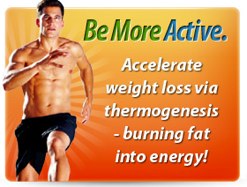 Both of the Prescopodene website make large claims about the effectiveness of their product.  Their opening gambits include statements such as, “average weight loss of 2 ¼ stone,” “imagine losing up to 37% of your body fat in a few short weeks,” and “your metabolism will increase by an extra 97%.”

These are audacious claims, but unfortunately they appear to be entirely unsubstantiated.  There is very little evidence to back up any of these figures even on the company’s own website, never mind once you look into what the tablets actually contain.

Extracts such as green tea and ginger root are often cited as weight loss aids.  There is evidence to suggest that both of these extracts can help slightly in boosting the metabolism.

Green tea, for example has been widely used for centuries in Asia to aid digestion and studies have shown that drinking at least 3 cups of green tea per day as help control your weight.

In the same way, root ginger is also a digestive aid and has mild thermogenic properties.  However, as if often the case on these weight loss tablet websites, there are no comprehensive lists of ingredients or details of the concentration of these ingredients.

Although some of these extracts may help weight loss, the chances are that they are added in such low concentrations in these tablets that they would have no effect at all.  Ascorbic acid is the scientific name for Vitamin C, and although it is not harmful, it is unlikely to produce weight loss.  What the Prescopodene tablets really boil down to is a placebo. 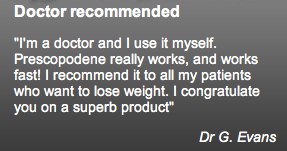 There are testimonials on the websites, although it is impossible to know whether they are genuine or not.

If they are genuine, then the chances are that the weight loss is down to the placebo effect of the tablets rather than the tablets themselves, as they do not contain anything that would enable weight loss to the extent of the claims.

If a person takes a placebo and it is not harmful, but gives them the motivation and belief that they can lose weight, then that can only be a positive thing.

However, if someone is paying a lot of money to buy a tablet that claims that it will make the person lose weight without any input from themselves, not only is it immoral, but it is also taking away from the hard work of the person that actually managed to lose the weight all by themselves.

There are good slimming tablets on the market that are 100% natural and 100% safe that can assist you with your weight loss, however Prescopodene is not one of them.  Not only does it not appear to contain anything in it that would cause radical weight loss, it can also potentially cause strokes.

When a drug claims to give incredible weight loss but does not back it up with hard evidence, the chances are that it is too good to be true.  It would be wise to give Prescopodene a wide berth and try something that can be backed up true testimonials and scientific research.

Available to order online from the official website – or websites should we say, there are many different versions, there are UK, US, Canadian and Australian versions as well as many European language sites.

It costs around £30 – $45 depending on where you are in the world for a month supply.