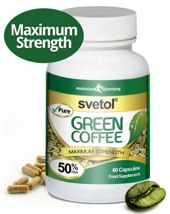 Coffee has been enjoyed as a beverage since the 14th Century and became a popular first drink of the day long before anyone realized its ability to wake up a pair of bleary eyes was due to the caffeine content of the bean.

More recently, the humble coffee bean—or more particularly green coffee beans—have been the focus of media attention because several studies confirm they contain a substance that can assist weight loss—even without regular exercise and a healthy diet.

Svetol Green Coffee is considered to be the strongest – we review Evolution Slimming’s Svetol brand which is touted to be the best of the lot!

Negatives: There are no real negatives as such – a complete product 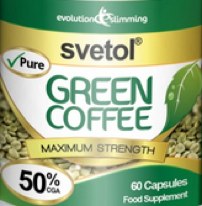 The worlds media is currently exalting the merits of green coffee and its benefits to weight loss. There are numerous brands that have been released all containing varying levels and concentration.

Health experts recommend that green coffee brands should contain at least 45% GCA (Chlorogenic Acid) and a quantity of at least 200mg per serving.

Svetol Green Coffee contains 50% GCA and 400mg per serving (4000mg of extract), making it the strongest green coffee supplement on the market.

In a recent study, after 2 months of continuous usage, participants experienced an average decrease in weight of 5kg (11lbs)

The Science Behind the Claims 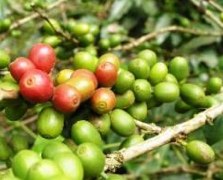 Green coffee beans are coffee beans in their natural state. The beans used for brewing coffee are roasted, and it cannot be denied the roasting process brings out the flavor, but it also destroys a vital substance hidden deep inside the bean. This magical substance is called chlorogenic acid (often marketed under the name Svetol).

Chlorogenic acid is known to encourage the body to burn more fat, but it also appears to have the ability to modify certain enzymes in the liver, which then reduce the amount of glucose produced in the body after a meal has been consumed. The enzymes also ensure that any glucose that is produced is released more slowly, thereby inhibiting the production or fresh fat cells.

The fat-busting abilities of chlorogenic acid have been the focus of several clinical studies.

Virtually caffeine free (less than 2%) & is made from decaffeinated beans

Like their roasted counterparts, green coffee beans are high in caffeine. This may present a problem to users who have a low tolerance to its presence and side effects might include the jitters, restlessness and heart palpitations. The majority of users are unlikely to encounter any problems, but pregnant and nursing mothers are advised to seek medical advice before embarking on a weight loss plan or using any form of dietary supplement.

In some countries chlorogenic acid may be listed as:

Green coffee bean capsules and pills are available in several strengths (200 mg, 400 mg, 800 mg etc.).  Lower dose capsules may still offer some benefit, but 400 mg capsules are generally believed to be the better option. Higher dose are permissible, but it may be prudent for users to check with their doctor before deciding on a dosage of 800 mgs or more.

Green coffee bean extract has proved its worth in several scientific tests, and it has the advantage of being a natural ingredient that can provide respectable weight loss with little likelihood of side effects for the majority of users.

It is arguably one of the best weight loss supplements available at the present time and offers the added benefits of being reasonably priced and readily available from a variety  of outlets, so green coffee bean extract is a highly recommended product, but discretion is advised before deciding which green coffee bean product to use.

Evolution Slimming’s Svetol is the best of the bunch. 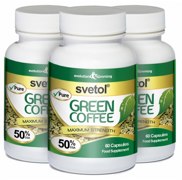 The official website is also translated into many languages.

The cost for one month is £24.95 with a 30 day money back guarantee on all orders. There is also a downloadable diet plan with each order.