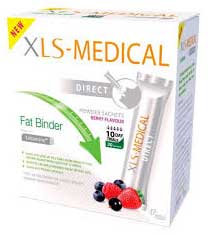 Fat binders assist weight loss by intercepting a high percentage of ingested fat and preventing it from being digested. As fat is a high calorie food, fat binders can be effective weight management tools.

Omega Pharma already produces a popular fat binding tablet, and the company appears to know its stuff, but XLS Medical Fat Binder Direct has been designed to offer dieters an easier to use option. It’s a dissolve-in-the-mouth powder, packed in one-dose sachets that can be emptied into the mouth and swallowed without the need for water

Claims: To bind with dietary fat from food consumed

Negatives: Some have suggested that this methodology is not the quickest weight loss mechanic of action

According to the Omega Pharma website XLS Medical Fat Binder Direct binds up to 28% of dietary fats. That appears to be its main claim to fame, but the company also point out the formulation does not interact with the body. It merely passes through it, taking the captured fat with it.

The active ingredient is a proprietary blend called Litramine that takes most of its power from prickly pear cactus (opuntia ficus-indica).

Prickly pear contains a soluble fibre that attracts fat from ingested food and causes the molecules to become too large to be digested in the normal fashion. Because the fat cannot be digested it does not release any calories and is simply passed with the stool when it finishes its journey along the gastrointestinal tract.

The XLS Medical website references a couple of studies conducted in Europe that appear to support the product’s ability to reduce fat absorption. The studies also indicate the formulation’s presence in the stomach may result in a feeling of fullness that may supress the appetite, but all the tests referenced were conducted between 2003 and 2012, and closer inspection of the data reveals the figures refer to either the main ingredient or XLS Medical Fat Binder (tablets).

Prickly pear has proven its worth in several tests though, and some (but not all) studies, indicate Litramine may have successfully harnessed prickly pear’s fat binding abilities.

During one 12-week double-blind, randomized, placebo-controlled study, conducted in 2009, for General Medicine (Berlin, Germany), the test subjects taking Litramine lost at least 5% of their body weight compared to the placebo group. The researchers concluded: “Litramine IQP G-002AS is effective in promoting weight loss.”

How to Use XLS Medical Fat Binder Direct

One sachet is taken three times a day at the completion of meals. Simply open the sachet, pour the contents into the mouth and swallow—it’s as simple as that.

Although no water is required to take the sachets, Omega Pharma stresses the importance of drinking a sufficient quantity of water throughout the day.

The majority of past customers state the product gets the job done and are happy with the results obtained.

“Wow I wish I tried this product before. Of course, it is not a magic sachet so I have been rather strict with exercise, food I had but it seems to be working! Recommend it.”

But not everyone feels the same way:

“
I would try anything to shift a few pounds but after taking these faithfully after meals 3 times a day I can honestly say there has been no difference…won’t be wasting anymore money on these fads.”

And a minority of users complain of side effects. One man was particularly sarcastic when sharing his opinion:

“Hey! Do you like stomach pain? Find that you’re not ingesting enough dry, coarse powder in a day? Hate money? Then this is the product for you!”

As the above comment shows, side effects cannot be entirely ruled out, but the main ingredient is not usually problematic, so such side effects are unlikely, and the majority of users should be able to use the formulation without issue.

Pregnant or breastfeeding mothers should always seek medical advice before using any brand of dietary supplement—as should anyone who has any existing health issues.

XLS Medical Fat Binder Direct can be found on the shelves of many high street shops and pharmacies, including Superdrug, Boots, and Tesco, but it’s an expensive product and a one-month supply (90 sachets) can cost up to £70. Customers shopping online can often secure a better deal by purchasing from Amazon UK. 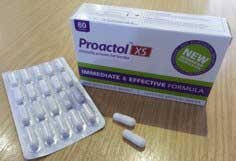 In the fat binder category we recommend Proactol XS. It is our opinion that since its inception in 2008 Proactol has continue to develop and invest in the latest weight loss technologies.

From Proactol to Proactol Plus to now Proactol XS we believe that if you have any any designs on fast, effective and safe weight loss then this product would be your perfect partner.