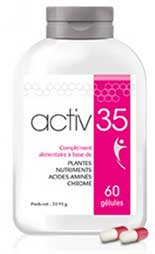 Activ35 is a diet pill made in France and marketed by L’Institut Nutritia. The company states the formulation has been specially developed to help women who are over 35 and need to lose weight. It sounds very clever, but most of the ingredients are diet-pill regulars, so the claim is probably only a marketing strategy.

The official website makes quite a few claims that don’t hold water. For one thing, the site states the pills influence leptin and ghrelin levels. Taking things further, it says the reason young people can eat as much as they want without putting on weight is because they have high leptin levels. Leptin is an appetite suppressing hormone. When levels are high the appetite is gone, so eating like a horse would not be possible.

Negatives: Not as effective as other leading brands

Vitamin B6 is necessary for a healthy metabolism. The metabolism governs the speed at which calories are used, so Vitamin B6 is quite a common inclusion in diet pills and other forms of weight loss supplement.

Guarana, yerba mate, and kola nut are all sources of caffeine. All three are diet pill regulars because caffeine can boost energy levels and lessen the fatigue that can often be a problem for people living low calorie lifestyles. Caffeine is also a mild appetite suppressant, and it has proven value as a metabolism booster and fat burner.

Chromium also stands out as being a useful inclusion. It helps regulate blood sugar and insulin levels, thereby helping to remove the desire to snack on sweet foods.

Most of the other ingredients also offer some level of value, but damiana and yam are the exception. Damiana is a herb that is often used as a libido booster. It is also known to be a laxative, but is not normally associated with weight loss. Some studies indicate yam may alter the sex hormone levels of post-menopausal women, but research conducted in Taiwan suggest this will have no bearing on the weight or level of body fat retained.

How to Use – Only two capsules are needed each day. One in the morning and one during the evening.

One 51-year-old woman who had a problem with belly fat claims she had almost given up hope until Activ35 “revolutionised” her life and helped her to lose 18kg in 9 weeks—without diet and exercise. A 63-year-old woman who was tired of her spare tire states she lost 21kg in less than three months.

Reviews placed elsewhere on the internet are not nearly as good.

A couple of examples read:

“Activ35 failed me badly. Even with a healthy diet I never lost any weight at all.”
“I used Activ35 for a month and it was a total waste of time and money. I’m going to stick to diet and exercise from now on.”

Activ35 is unsuitable for women who are pregnant or nursing a child. It is also unsuitable for anyone who has a history, or a family history, of breast cancer. Anyone who has existing medical issues should consult a doctor before using any brand of supplement. The same advice holds good for people who are using medication.

Where to Buy Activ35

Activ35 can be purchased from the manufacturer’s website at a cost of €39.90 per (60 capsule) bottle of pills. Customers who wish to get a better deal can take advantage of some of the multi-buy savings offered on the site.

The guarantee period is 60 days.

The Activ35 formulation contains ingredients that support weight loss, but there is nothing about the formulation that is likely to make it particularly beneficial for women, no matter what their age. The formulation could have been greatly improved by the addition of some green tea, green coffee bean extract, or nopal. It would have also been good to see some capsicum extract. Customer reviews available from unbiased sources suggest the formulation has failed many people, but it still seems likely it help improve the efforts of people who are already eating sensibly and getting plenty of exercise. However, Activ35 is not one of the best diet pills on the market. Having said that, there’s a money back guarantee so, other than postage costs, you won’t have much to lose if you decide to give this one a go.

We recommend PhenQ, a complete diet pill that has many benefits such as fat burning, fat blocking and suppressing appetite.

PhenQ is also suitable for all people, men women of all ages.

A long 60 day guarantee and free delivery all over the world further enhanced PhenQ’s reputation.

A full PhenQ review can be found here