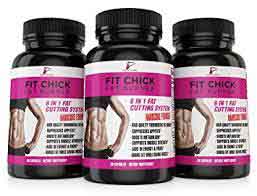 Fit Chick Fat Burner is diet pill made for women. How do we know?

Because the company responsible for bringing it to market tells us so is the marketing material.

The company is called Ignite Pharm and the big problem with their diet pill for women is it contains exactly the same formulation of ingredients as their diet pill made for men.

It’s called Insane Burn and the only differences between the two products are the colour of the bottle, the label, and the marketing claims.

Both products are exclusive to Amazon and, working on a hunch, we dug a little deeper and discovered many other companies selling the same product on Amazon, including BioCor Nutrition, who are selling it as a unisex thermogenic fat burner called HydroxyCOR.

Fit Chick Fat Burner is obviously a private label product and the claims that it’s designed for women are only half true because it’s also intended for men.

Claims: To be a a diet pill made by women for women. Thermogenic fat burner that also stops hunger and support muscle and strength

Positives: Contains some good clinically studied ingredients such as glucomannan

Negatives: Contains a lot of ingredients. In our opinion there are better products that will give you a better chance of success.

Fit Chick Fat Burner: What Customers are Told to Expect

According to the label, Fit Chick Fat Burner is a Hardcore 6 in 1 Fat Cutting System that:

What Is Fit Chick Fat Burner and How Does It Work?

The claims that it may improve muscle and strength are obviously intended to make the pills sound appealing to sporty types and gym-goers of all kinds. The truth is, it may do these things.

The fact that it is being marketed towards women and is nothing more than a clone of countless other products is neither here nor there. Ability is what counts. Let take a look at the ingredients and find out the truth about what the product is likely to do. 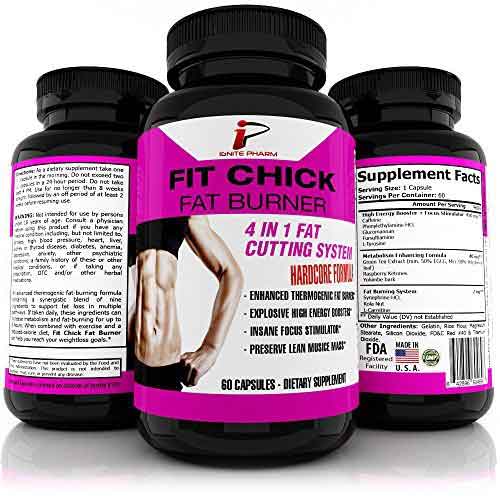 Usage Instructions
– The back of the bottle states the dose is one capsule, taken each morning. It then warns against taking two capsules in any 24-hour period or taking the product later than 4pm. After eight weeks of use, a pause of at least two weeks is required.

At the time of our Fit Chick Fat Burner evaluation, we could only find eight customer reviews.

That’s not enough to provide a sufficient insight into what the product can do and most of the women who left a positive reviews admit they were given incentives to leave feedback.

This casts some doubts on how reliable customer feedback is likely to be.

To make matters worse, one woman awarded the product a full 5-star rating on her hopes that it works rather than her experience with it, stating, “I’m trying to lose weight so I’m hoping this product kicks my fat into going away.”

One customer states Fit Chick Fat Burner made her feel nauseous for a week and gain three pounds. That suggests possible tolerance problems, so we suggest all potential users avoid using this product unless their doctor has told them it is safe to do so

Fit Chick Fat Burner is an Amazon.com exclusive and it’s only available to people who have shipping addresses located in the US of A.

A money back guarantee is offered, but its duration is not stated.

The fact that Fit Chick Fat Burner is marketed as a diet pill for women when it’s obviously anything but is not so much of a problem.

The lack of inclusion rates is a different matter. It makes it impossible to get a clear picture of what the product is likely to do (good or bad) and a few of the ingredients, including caffeine and yohimbine, may cause side effects if the inclusion rate is unusually high.

The absence of reliable customer reviews is also a problem.

It’s possible the formulation may do some or all of the things that are claimed, but it’s equally possible it will not. However, unless you are reading our Fit Chick Fat Burner review from somewhere in the US, our findings are unlikely to make a big difference to you either way.