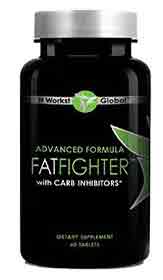 IT Works Fat Fighter is part of a reasonably large and diverse range of health and wellness products being marketed by IT Works.

Other items in the range include face cleansing gel, ketone-boosting coffee, and essential oils.

IT Works Advanced Formula Fat Fighter is designed to block the absorption of dietary fats and carbs.

If it can do this, it may help people to reduce their calorie intake sufficiently to cause the body to start burning its fat.

Claims: To block some of the fat and carbs from meals, balance blood sugar and reduce hunger cravings

Positives: Contains some good ingredients, Company has been around for a long time

Negatives: Method of payment is questionable and not entirely to our taste.

IT Works was founded in 2001 by ex-school teacher Mark Pentecost and the company’s flagship product was a body-toning wrap that proved to be so successful, IT Works had clocked-up over $200 million in sales by 2012 and was already expanding its range.

The following year, Pentecost’s rags to riches story was published in Forbes magazine.

However, the company has also had it’s fare share of bad publicity and over 400 customers have made complaints to the Better Business Bureau.

Many of the complaints are from customers who claim the company uses shady tactics to lure customers into signing up for it’s autoship program, which subsequently proves to be extremely difficult to cancel.

What Is It Works Fat Fighter?

Fat blockers limit the amount of dietary fat the body can absorb. Carb blockers do the same with carbohydrate.

IT Works Advanced Formula Fat Fighter is designed to do both. Each gram of fat consumed would normally provide the body with nine calories.

A gram of carbohydrate provides four. If the product is used a part of an overall weight management program that includes healthy low-calorie food choices and regular exercise, it may may be capable of living up to its name.

The rest of the ingredients are housed in a proprietary blend (510mg).

Usage Instructions  – Two tablets are needed up to an hour after the biggest meal of the day. Customers are also told to drink at least eight glasses of water per day.

“I feel less hungry now and have managed to drop a couple of dress sizes, so I am happy to recommend.”
“Despite all the claims the distributor made (read BS), these tablets are a total waste of time and money.”
“I’ve been taking 6 tablets a day and watching what I eat. I’m losing about 14 pounds a month and am more than happy with that.”
“I may be pooping a bit more these days, but that’s about it.”

Many customers say the product causes diarrhea. That’s understandable because all that blocked fat and carbs has to go somewhere. When this kind of product is used with a calorie-controlled diet that is low in fat, this kind of reaction is unlikely to be such an issue.

IT Works state women who are pregnant or nursing a child should get a doctor’s approval prior to using the product. The company offers the same advice to people who are using medication or have existing medical conditions.

IT Works is a multi-level marketing business and customers are encouraged to become a “Loyal Customer” and receive an ongoing supply of goods via autoship, through a company distributor.

People who don’t wish to do this are penalized with higher prices.

However, even when customers click the button that says “no thanks, I’d rather pay a membership fee”, they need to keep their wits about them because when they choose to check out as a guest, the system sends them to a page that tells them they are checking out as a guest, in nice big letters.

In smaller letters that are slightly grayed out, it states they are also checking out as a Loyal Customer. The set-up seems to make it impossible to make a simple one-off purchase.

There is no money back guarantee.

The IT Works Advanced Formula Fat Fighter formulation contains some good ingredients, like chromium and nopal, but they are diluted by ingredients of more disputable value, such as banaba leaf and vanadium.

To make matters worse, many of the inclusion rates are unknown thanks to the use of a proprietary blend and it seems likely, in many cases, the amounts provided will be far too low.

To be fair, it’s not inconceivable that the tablets will provide dieters who are eating clean and exercising hard with some improvements to their results, but IT Works Advanced Formula Fat Fighter does not compare well to many alternatives and it seems likely a lot of customers may be lumbered with an ongoing supply of diet pills that they did not knowingly request or want.

When we review diet products one of the criteria we place a high value is the transparency of the company involved. We like to know how much it is, and what happens if I want to send it back.