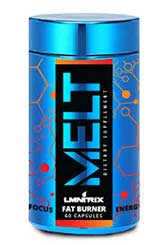 Melt Fat Burner is a sports supplement produced in the USA by lmnitrix.

The fact that it is designed to encourage fat burning is bound to attract the attention of a lot of people who wish to drop a few pounds and get back in shape, but not all fat burners are created equal.

Melt Fat Burner is not intended for people whose only need is to lose weight. lmnitrix have created their fat burner with bodybuilders and other athletes in mind and say it is for people who wish to “power through” their workouts, accelerate weight loss, and “feel more energized without the crash”.

Claims: To produce a thermogenic fat burning reaction and speed up metabolism.

Positives: Good brand with a good set of ingredients

Negatives: Not a negative as such but in this niche (fat burners specifically for bodybuilders) we prefer Instant Knockout

The promised benefits are:

What is Melt Fat Burner and How Does it Work? 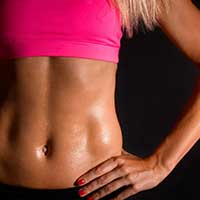 Like the majority of fat burners, Melt Fat Burner contains ingredients that have been included for their ability to speed up the metabolism. A faster metabolism burns calories more quickly and increases the likelihood of a calorie deficit that will require the burning of body fat for extra energy. Melt Fat Burner also contains ingredients to suppress the appetite and help the user to eat less food. If it is successful in this regard the reduced intake of food (and calories) will further increase the likelihood of the desired calorie deficit.

The above two benefits are very similar to those offered by most good diet pills, but bodybuilders and other athletically inclined individuals often require more energy than their diet and stores of body fat can provide. Maximizing the benefits of their workout and obtaining optimum results requires they push themselves to the limit. Melt Fat Burner contains stimulants to help them to do so. Most dieters do not require such a level of stimulation and may find the amount of stimulants provided is to high for them.

Each Melt Fat Burner capsule contains 250mg of caffeine. This should be good for providing extra energy and the effects will probably kick-in quite fast. It should boost focus and concentration as well, but 250mg is quite a high dose. Coffee drinkers would need to down 2 1/2 cups of coffee to attain this amount. The formulation also contains 167mg of Choline BiTartrate, which can be useful for delaying the onset of fatigue.

The rest of the ingredients included in Melt Fat Burner are housed in a proprietary blend:

Capsimax has a good reputation for fat burning. Synephrine boasts similar credentials and is also a stimulant, so it should give energy levels a boost. Beta Phenylethylamine is often added to nootropic supplements because it seems to be capable of boosting serotonin levels. This may improve the mood and suppress the appetite. Huperzine A is also a popular nootropic that is often used to treat the symptoms of dementia. Like caffeine and synephrine, hordenine is a stimulant and dendrobium is an orichid extract that may improve mental focus. All the other ingredients have merit, but the lack of inclusion rates makes it impossible to predict how beneficial each one is likely to be and makes effective evaluation impossible.

Usage Instructions – Melt Fat Burner should be taken for a minimum of four weeks and use must be stopped after eight weeks. The required dose is one capsule in the morning and a second capsule in the mid-afternoon. It is important to leave at least six hours between doses, but lmnitrix say people who have exceptionally high tolerances to stimulants can take two capsules twice per day. However, new users are advised to start with just one capsule per day and monitor for tolerance issues. Drinking plenty of water throughout the day is also recommended.

Customer feedback is mixed. Some people say the product worked well for them, others say it did nothing at all, and still others complain about side effects.

“Totally fantastic product. I felt it working from day one. It became easier to be satisfied with less food, I had bags of energy, and lost 8lbs in in the first week.”

But an dissatisfied customer states:

“Very disappointing product. No extra energy and no weight loss. The only thing it did was make me feel sick and jittery.”

Melt Fat Burner is not intended for people who are under the age of 18, people with serious medical conditions, or women who are pregnant or lactating. lmnitrix suggest all potential users get medical advice prior to starting supplementation. Any user who experiences blurred vision, dizziness, rapid heart beat, or other similar symptoms should stop taking the pills and seek medical advice at once.

Melt Fat Burner only appears to be available from the manufacturer’s website and from Amazon. The RRP for a bottle of Melt Fat Burner (60 capsules) is $59.99 (£41.80), but at the time of this review customers purchasing via the official site only needed to pay $29.99 (£20.90) per bottle and the Amazon price was $39.99 (£27.85). However, Amazon customers were also offered the chance to take advantage of bulk buy discounts. Visitors to the official site were not.

Melt Fat Burner is sold without a money back guarantee.

Melt Fat Burner contains too many stimulants to be suitable for normal weight loss purposes, but it may have value as a bodybuilding supplement. However, the mixed feedback it has received suggests it is unlikely to ever become a leading brand. 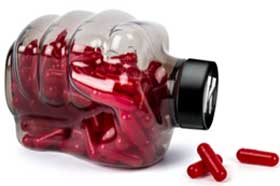 If you intend to use a fat burner as part of your workout regime then we recommend using a product such as Instant Knockout.

Instant Knockout has been designed and created but enthusiasts that actually use the product and understand about formulation.